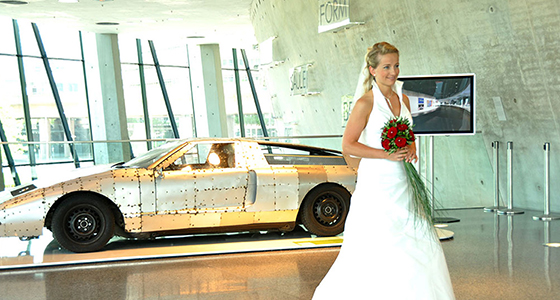 In 2011, I was on a one-month solo journey across central Europe, which included stops at 22 destinations in 7 countries. Along the way, I visited 8 auto museums.

One particularly unforgettable auto museum visit was to the Mercedes-Benz Auto Museum in Stuttgart, Germany. This museum is known for being a venue for weddings. It actually offers a full range of services for a bride and groom’s special day, enabling the subsequent wedding feast to take the form of a wide variety of on-site events—from discreet champagne receptions, to lavish parties with a Mercedes-Benz classic car, or even an intimate after-hours repast at the museum’s restaurant. These occasions also come with wedding photographs taken in the setting of the exhibition, guided tours for wedding guests, or new car bookings with direct access to the main entrance.

On the day that I visited the MB Auto Museum, I was fortunate enough to catch a wedding photo session taking place. The bride-to-be was blissfully posing for her photographer, and I asked their permission to take a few snapshots of her while her photog was still setting up.

Here are the pictures to show for my “romantic” visit to the MB Auto Museum. The bride’s backdrop is an automotive masterpiece created by the Berlin based sculptor Michael Sailstorfer.

Sailstorfer practices ‘real collage’ in his work commissioned for the Daimler Art Collection by rebuilding a Mercedes 190 (W 201) as a legendary C 111. Sailstorfer makes use of the popular 1980s series vehicle, which is transformed, with loving attention to detail, into an art version of the rare and highly desirable prototype model C 111, the artist’s dream car since his youth. “I would like to create versatile but at the same time functioning sculptures in places which I like,” says Sailstorfer.

Sailstorfer sets his hand on objects properly in all constructive and technical parts. They get dismantled, deformed, adapted, reassembled and reinterpreted into ambivalent hybrid objects on the border of pictorial aesthetic and functional technology. The space occupied by his sculptures is as essential as the space, which surrounds them. Sailstorfer’s transformation process is even more important than the final object, and that is why in the end, every working step has to remain clearly visible in his sculptures.

It also fitting to include the Mercedes-Benz 300 SL Coupe in this context. And there are a lot of such models in the Stuttgart museum. The 300SL, more popularly known as the Gullwing, looks romantic to ride in what with its two seats. I thought, for a while, that the SL stands for “sensual” because it really looked desirable (of course, SL actually stands for “sport” and “leicht”, or “sporty” and “light”).

The 300SL production sports car presented in 1954 was based on the successful competition version of the 1952 model. Its space frame weighted only 110 lbs. and was particularly sturdy, but did not permit the fitting of normal doors because of the high frame side members. With its characteristic upward-opening doors, the dream car of the 1950s popularly became known as the Gullwing.

Peter Ruch, author of the “Legendary German Cars”, noted that Mercedes-Benz never imagined a series production of the W194. Yet Maxi Hoffmann, the American importer, kept insisting on a sports car to contrast the stern conservative image of Mercedes-Benz. The 300SL with its gullwingdoors (W194) was probably the last European dream car of the ‘50s. It wasn’t just the gull-wing doors that were out of the ordinary, but even its direct injection engine, and besides, it was one of the first race cars to be used on regular roads.

The Mercedes-Benz museum is truly a one-of-a-kind example of living art, a marriage of automotive history and contemporary life. I was just too happy to be caught up in its photographic crossfire.