Social media has become toxic. We are all experiencing this with the proliferation of fake news peddlers, trolls, racists, sexists, misogynists, and all sorts of unsavory characters on social networks.

And yet, social media remains a popular and useful platform that allows us to connect with family and friends, wherever they may be around the world. Throughout the years, I have built meaningful relationships with many people online—even when I have yet to meet some of these individuals in real life. Social media is a powerful tool for sharing ideas, promoting causes and advocacies, inspiring movements, and mobilizing people on a scale that would be impossible without digital platforms.

Why then should we throw away the tools when we are the ones who have been using them wrongly? Why should we stop using social media for good just because angry voices are trying to drown out meaningful and respectful conversations?

Of course, there are no easy answers, but as in all things in life, the solution starts with us as individuals, through personal change. While we might not be able to change the world overnight, and many things will always remain outside our control, we can change how we react to what is happening around us, and resist the temptation to become toxic social media users ourselves.

And as we all eventually learn in our journey through life, making a personal change involves thinking of others.  This is why personal change causes a ripple effect that can change the world. Our actions have an impact on other people and will elicit reactions from them, which in turn will lead to their actions affecting others, and so on. Add to this social media, which amplifies actions and reactions to such a degree that it has often been called word of mouth on steroids, and you can see how even your smallest act can have big consequences.

The situation these days reminds me of a talk I gave on December 10, 2011 in Ateneo at the first Social Media Summit organized by the Ateneo Association of Communication Majors. I was then the Southeast Asia Head of Social and Community of Yahoo! Southeast Asia, and my fellow speakers included Maria Ressa and Jim Paredes.

In my presentation, I stressed the need for the responsible use of social media (https://ph.news.yahoo.com/blogs/the-inbox/teaching-youth-social-media-responsibly-072359543.html). I told the students attending the summit that unlike in the old days of journalism, readers are no longer passive consumers of news, but in fact decide what is news to them. The balance of power has shifted to individuals. With all the digital tools readily available to us, anyone can be a publisher and a broadcaster. You don’t need to own a printing press and a TV station. You just need Facebook and YouTube.

Every day, whether we realize it or not, we are content creators. We write our own stories, comment on the posts of others, curate news we find from different online sources, and distribute content by liking and sharing. Moreover, our potential audience is not just the people we know, but anyone around the world.

It is the kind of power that once belonged to an elite few, but which many of us take for granted and carelessly wield. Yet as Uncle Ben taught us, with great power comes great responsibility.

“Being virtual is no excuse for being vicious,” I emphasized in my talk.

Back in 2011, I had no idea of course how much worse the social media environment would become. Nowadays, it seems that being vicious is the new normal. As this Techcrunch article (https://techcrunch.com/2019/10/20/facebook-isnt-free-speech-its-algorithmic-amplification-optimized-for-outrage/) put it, “Facebook isn’t free speech, it’s algorithmic amplification optimized for outrage.”

No wonder it’s a toxic environment, when articles or social media posts that provoke outrage are the ones that are highlighted in the newsfeed and get the most shares and reactions, which means they will appear more often in the newsfeeds, provoking even more outrage, resulting in a vicious cycle.

It’s why you often hear the advice: “Don’t feed the trolls.” Because the more you share the posts of people you disagree with and engage in a word war in the comments section, the more the algorithm rewards these posts for engagement. And, in the case of paid trolls, the more money they earn.

Of course, while personal change is important, the other side of the coin is the responsibility of media, whether traditional or online. While the balance of power has shifted to readers, media organizations still wield a lot of influence on what kind of stories become news and get shared on social media. As media practitioners, we owe it to our readers to publish the truth and not contribute to the spread of toxicity online.

This October, I attended the “Media Evangelization: Likes, Comments, Shares” forum at the Loyola School of Technology in Ateneo after being invited by my godmother Myra Salvosa. The main speaker was Manila Archbishop Luis Antonio Cardinal Tagle, who by the way, was appointed by Pope Francis on December 8 as the new Prefect of the Congregation for the Evangelization of Peoples (https://www.vaticannews.va/en/pope/news/2019-12/cardinal-tagle-is-the-new-prefect-of-propaganda-fide.html).

In his talk, Cardinal Tagle stressed that media practitioners should avoid sensationalizing the news and warned against “glamorizing evil.”

Now, you don’t have to be a Catholic like me, or to believe in any religion, for that matter, to be alarmed by the way media coverage of the news can normalize vicious behavior and desensitize people to violence, corruption, and the other evils of society.

It is still media’s responsibility to decide what is newsworthy, instead of just quoting whatever lies or outrageous statements politicians make, or devoting so much airtime to showbiz scandals or celebrity word wars. Media is supposed to raise the level of discourse, instead of pandering to the lowest common denominator and the baser instincts of human beings.

Ironically, in their misguided attempt to stay relevant and boost page views and ratings by wallowing in mud, media organizations might be further alienating the youth who are not big fans of the media in the first place.

As another speaker at the forum, Fr. Jboy Gonzales, SJ, the host of ABS-CBN’s “Kape’t Pandasal”, stressed, the youth are far from apathetic and are hungry for meaningful conversations and relationships. That is why young people are even leaving Facebook, because of the toxicity that is adding to the stress they are already experiencing.

Citing the results of McCann Truth Central’s Truth About Youth 2018 survey, he pointed out that millennials are still asking the same questions even in the digital age, focusing on three things: Identity, community, and purpose.

As I told Fr. Jboy when I approached him after his talk, the good news of spirituality and selflessness would seem to be suited to social media, since apart from outrage, it is joyful news that gets the most shares and engagement on Facebook. We see this in action every day, when we congratulate our family and friends, or like and share photos of joyful events and milestones such as weddings, births, and graduations, or news about acts of kindness and heroism.

This does not mean that we should not speak out against injustices or turn a blind eye to evil. What I am saying is that instead of just complaining on social media and wallowing in negativity, we should do something about it.

Social media can be a powerful tool for good, but only if we translate our virtual likes and shares into real-world actions. Find your purpose, and cooperate with others who believe in the same advocacy.

Together, we can change ourselves and change the world. 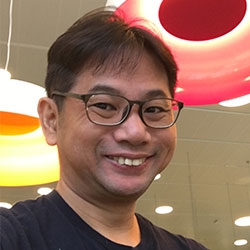 Joey Alarilla
Joey Alarilla is the husband of Ellen and the father of Sam. A geek and tech advocate, he has worked for different media and tech companies such as Metropolitan Computer Times, the Philippine Daily Inquirer, INQUIRER.net, Yahoo! Southeast Asia, Lazada, and e27. He is the author of the Philippine Internet Commerce Society’s E-Business Made Easy handbook for SMEs and the former president of the Information Technology Journalists Association of the Philippines, more popularly known as CyberPress Philippines. In 2004, he won a Palanca Award for his essay Surviving the Zeroes, which talked about his daughter Sam and parenting in the digital age. He is the founder of Manila-based media startup Digital Life Asia, which covers technology, science, gaming, and geek culture across Asia. Follow him on Twitter: @joeyalarilla