The protein found in Quorn meat-free foods may be just as good for muscles as any other protein sources, new research suggests.

Food labelling usually lists protein as a simple number, but some proteins have better “bioavailability” than others – meaning more can be used by the body.

Animal proteins like milk are known to have high bioavailability, making them the known source of building blocks for muscles.

The study was a collaboration between Quorn Foods and the University of Exeter, and the university scientists say more research is now needed to see if the high bioavailability of Mycoprotein translates to beneficial effects, equivalent to animal proteins, on muscle tissue for various different groups of people.

“In the last decade or so, nutritional research has led to more and more people – including athletes and older people – being advised to consume more protein than the standard recommended daily allowance,” said first author Mandy Dunlop, of the University of Exeter.

“At the same time, government and societal concerns about the sustainability and environmental effects of producing animal-based proteins like meat and dairy products have been growing.

“Quorn’s Mycoprotein is produced with far less impact on the environment, and our research shows the bioavailability of its protein is equivalent to that of milk.”

Researchers’ assessment of the bioavailability of Quorn’s Mycoprotein as “very good” provides a viable alternative protein source to dairy products, which have come under closer scrutiny for various health issues arising from its consumption.

An Aug. 30, 2016 report of the Physicians Committee for Responsible Medicine (PCRM) cited one such study showing that replacing animal fats with plant-based foods decreases a person’s risk for developing heart disease.

The study, published online Aug. 24 in the American Journal of Clinical Nutrition, looks closer at dairy fat and the risk of cardiovascular diseases in 3 cohorts of US adults (Chen M, Li Y, Sun Q, et. al).

Researchers followed 222,234 participants from the Health Professionals Follow-Up Study and the Nurses’ Health Study I and II, and monitored dietary fat intake and cardiovascular disease incidence rates. The results showed that replacing 5% of dairy fat with an equal amount of vegetable and polyunsaturated fats decreased heart disease risk by 10% and 24%, respectively. Researchers also observed a 28, 34, and 16% lowered risk for cardiovascular disease, coronary heart disease, and stroke, respectively, when participants replaced dairy fat with whole grains.

Earlier that year, on June 27, PCRM also revealed, through 9 studies, that dietary cholesterol had been linked to an increased risk of breast cancer.

PCRM cited a meta-analysis published that year in Nutrition Research.

Consuming protein results in an increased availability of amino acids and insulin in the blood, leading to “muscle protein synthesis” (muscle building) in the hours after eating.

“The overall availability of amino acids derived from Mycoprotein over a four-hour period following a meal was equivalent to the same amount of protein derived from milk,” said senior author Dr. Benjamin Wall.

“We concluded that Mycoprotein provides a very bioavailable dietary protein source, and speculate that it would be an effective source of protein to support muscle building in a variety of populations.

“This study also took a dose-response approach such that the data gave us some direction for how much protein individuals should consume within a meal depending on whether they are looking for sufficient, or optimal, effects on muscle tissue; though definitive conclusions on this will require further work, especially to translate to longer-term effects on health and/or performance.”

The paper, published in the British Journal of Nutrition, is titled “Mycoprotein represents a bioavailable and insulinotropic non-animal-derived dietary protein source: a dose-response study.”

https://www.eurekalert.org/pub_releases/2017-10/uoe-qpo100917.php, with reports from the PCRM website: Dairy and Other Animal Fat Increases Risk for Heart Disease: https://www.pcrm.org/health/medNews/dairy-and-other-animal-fat-increases… 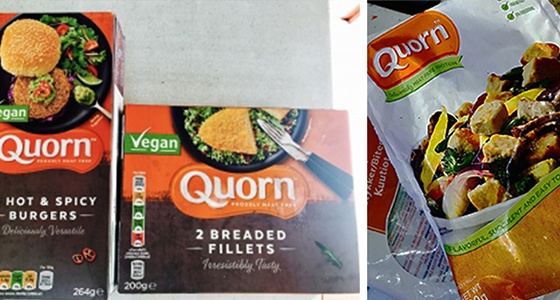