Looking at the world map, the Philippines sure doesn’t look much geographically. It looks tiny compared to the giants such as China, the United States, Brazil, or even to its neighboring fellow archipelago down south, Indonesia. But when you get down to the ground and drive the Philippine road network from Luzon to Visayas to Mindanao, then back to Luzon, that’s when you’ll realize that in driving, it’s not the land mass that matters, but the quality of the drive.

We recently made that drive completing a full loop of the Philippine archipelago, a 3,000-km road trip connecting Luzon, Visayas and Mindanao using the country’s so-called “Strong Republic Nautical Highway” (meaning, we used the roll-on, roll-off vessels to ferry us and our vehicle from one major island to another).

We started the trip in Muntinlupa City in southern Metro Manila, and drove our way southeast, to the Bicol region, where we crossed over to Samar and Leyte before jumping onto Surigao in Mindanao. Then, in Mindanao, we made our way westwards to Cagayan de Oro and eventually to Dapitan in Zamboanga del Norte in Northwestern Mindanao, where we crossed over once more to Visayas. On our way northwards back to Muntinlupa, we used the western nautical highway route that would pass by Dumaguete, Bacolod, Ilioilo, Antique, Aklan, Mindoro, and Batangas provinces.

During that 9-day odyssey, we learned so much more about our own country that geography and history classes couldn’t possibly achieve. And since we’re celebrating our Independence Day weekend, TessDrive has found it quite apt to share with you some of the national historical landmarks that we found along the way. Mind you, there are dozens more out there, but we just didn’t have the time to get to them all.

Sure, Rizal Park is a lovely place to spend Independence Day—if you’re gonna celebrate our nation’s freedom with the death of our foremost hero Jose Rizal. Why not observe Independence Day differently by holding it in these places?

After our Roro docked in Lipata Port in Surigao (after leaving Liloan Port in Southern Leyte) and as we drove our way out of the pier, we saw the marker of the Battle of Surigao Strait, which happened on October 24 and 25, 1944. The marker, placed there by the Surigaonon Heritage Center, commemorates the naval battle between the Japanese and American forces.

If our national government held the Independence Day celebration here, it would certainly be a boost for the self-esteem and pride-of-place of Mindanoans, who have had to suffer decades of the negative perception their island was receiving from their northern compatriots and foreigners as a result of the never-ending conflict between the country’s armed forces and Muslim separatists and alleged terrorists who maintain hideouts in southern Mindanao.

What’s more, if the Independence Day celebrations were held here, visitors would get that 2-in-1 treat of paying their respects to the national flag and being so close to the best surfing spots in the country. Oh, and add the beautifully mysterious Enchanted River to that. 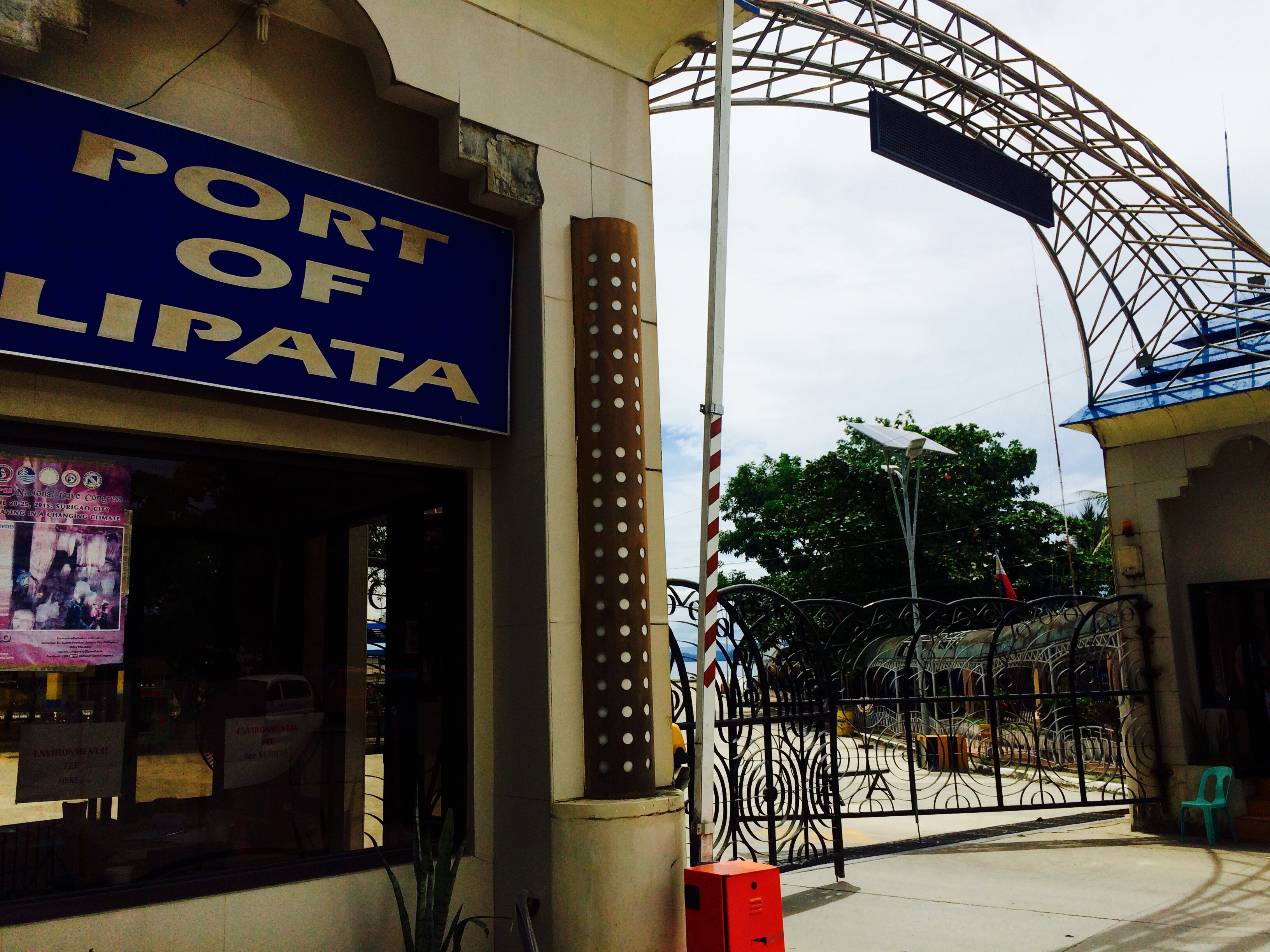 By itself, the coastal city of Dapitan wouldn’t be hard to fall in love with. The lush greens, the blue sea, and the friendly folk will melt your heart faster than ice on the pavement at noontime in summer. But what will really sweep you off your feet are the golden sunsets. Jose Rizal probably noticed this, too, when he was exiled here.

And that’s why we recommend Dapitan as another alternative site for the Independence Day observation. Future presidents might want to consider starting the ceremonies in late afternoon, just as the yellow sunlight turns to bright orange, then fiery red, and bathes the larger-than-life statue of Rizal and his security escorts Captain Delgras and three artillery men in the glowing, golden rays of the dying sun. According to history, on the beach of Sta Cruz, Jose Rizal landed at 7 p.m. on July 17, 1892 to begin the life of an exile. Now isn’t that both symbolic and dramatic? 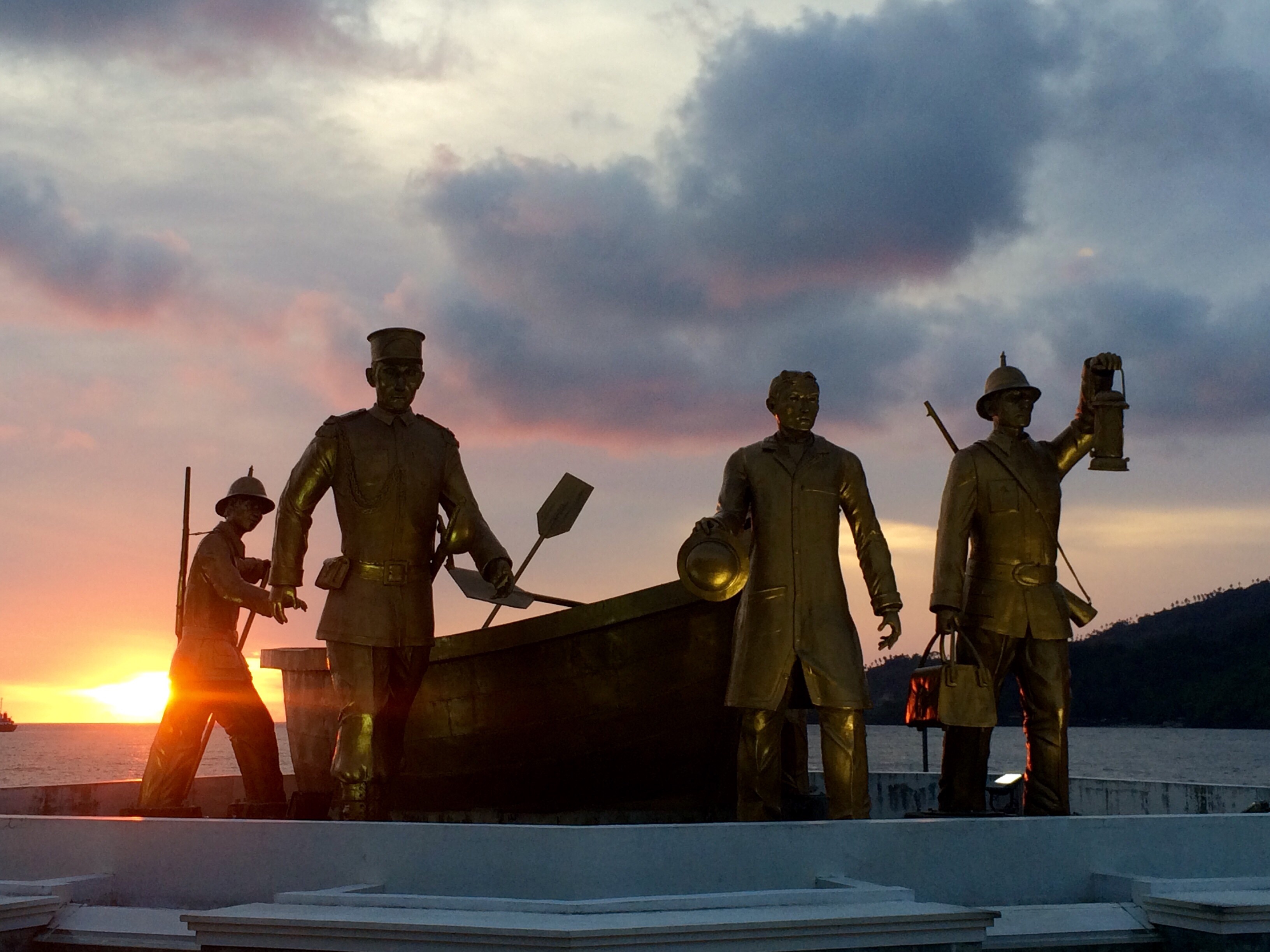 Okay, many would argue that the “Taj Mahal of the Philippines” would be better suited for weddings and other life-changing occasions. But wait, there’s more to The Ruins than the enduring love story of Don Mariano Ledesma Lacson and his wife Maria Braga. True, the mansion was built by Lacson in loving memory of his wife Maria Braga who died in 1911. The haciendero spared no expense, employing the best designers who used Italianate architecture to symbolize undying love. But in the eve of World War II, in 1942, the mansion was torched by guerrilla fighters and burned for three days, leaving behind the shell of a glorious, romantic past.

Undying love—what could better explain, in two words, how we should regard our own country, our sovereignty, and independence? The shell of the mansion that we see now, which describe The Ruins per se, might draw in the crowds. But what really makes the trip memorable and so worth it are the stories—personal and nationalistic, romantic and patriotic—that still waft fresh and pure within its exposed hallways, rooms, nooks and crannies. 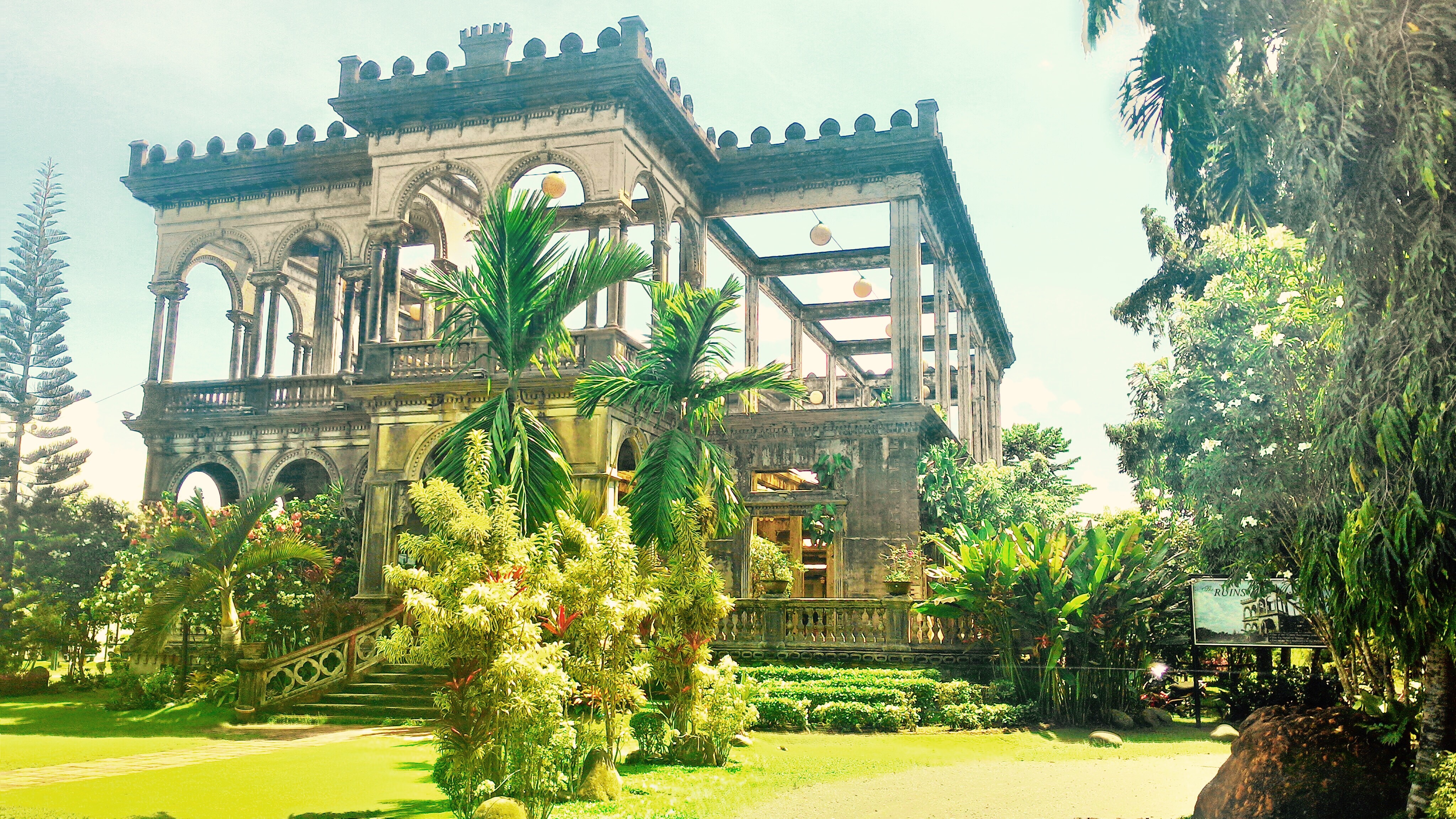 Here’s the deal: If The Ruins is too romantic for an Independence Day celebration, then it’s just a 90-minute Ro-ro trip from Bacolod Port (Bredco) to Iloilo, where we’ll find the Santa Barbara Heritage Zone, and the perfect candidate for such an important national event. (True enough, President PNoy Aquino did hold the Independence Day flag raising ceremonies here on June 12).

TessDrive happened to make a pit stop here a couple of days prior to the President’s arrival, and we did see heightened activities relating to the observation of our 117th year of independence. The Heritage Zone is meant to educate the townsfolk of Santa Barbara and nurture in them the value of freedom and democracy. According to history, the area of the Heritage Zone was believed to be where the revolutionary leaders of Santa Barbara gathered and acted to end the tyranny of the Spanish regime.

The Heritage Zone houses a number of markers: the Cry of Santa Barbara; Gen. Martin T. Delgado Monument; Santa Barbara Roman Catholic Church and Convent (a baroque renaissance church where Gen. Delgado convened the junta that raised the first cry of revolution against Spain); Victory Plaza; Flagpole Park; Rizal and the Propagandists Monument; and Santa Barbara Centennial Museum (which houses antiques, artifacts and photos that tell the story of Santa Barbara’s history and heritage. It is also a depository of memorabilia donated by the townsfolk, reflecting the town’s rich culture). 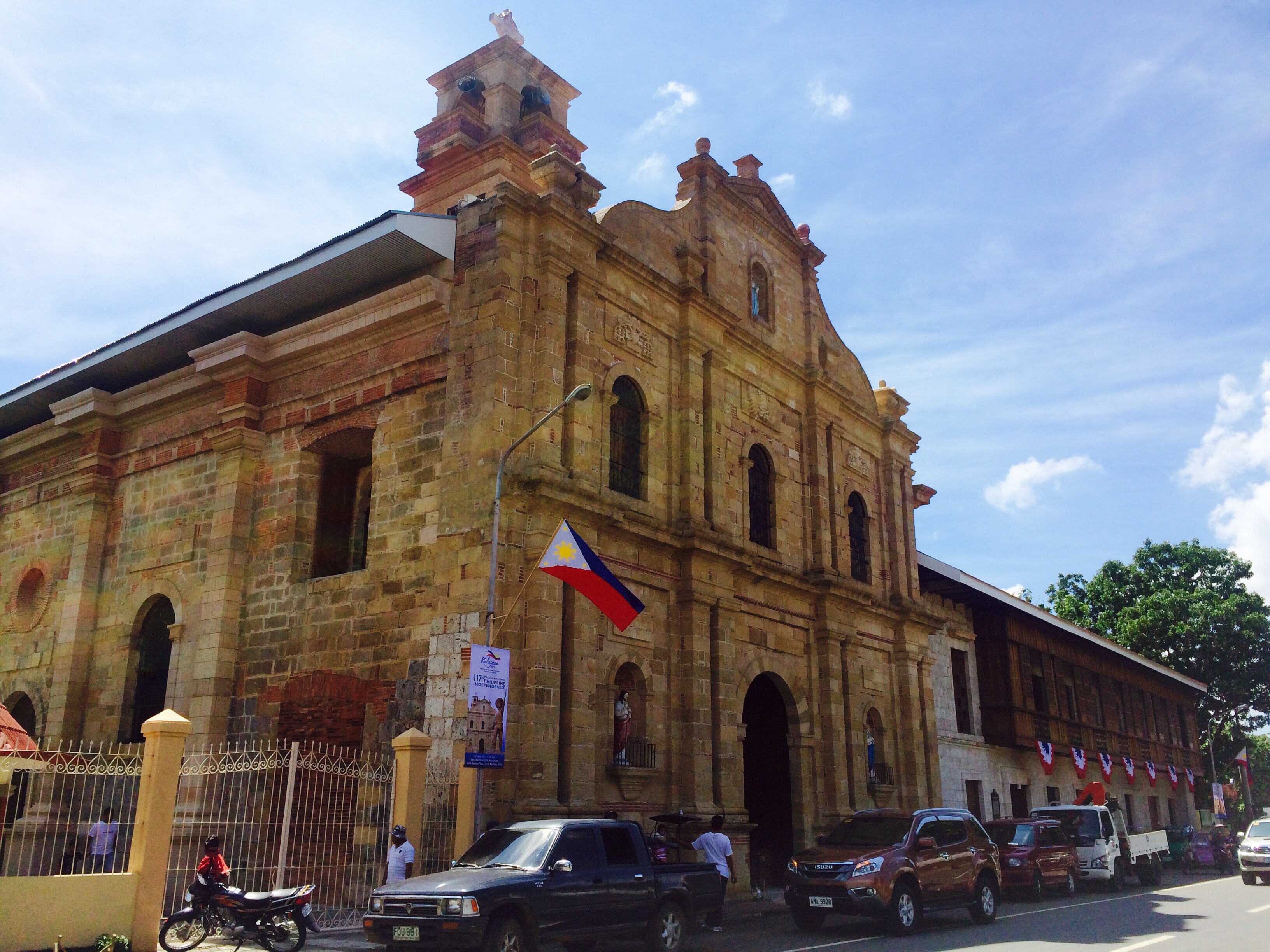