“Genes load the gun, lifestyle pulls the trigger,” was what I remember most from a November 2007 interview with a naturopathic doctor. It wasn’t the first time I heard of this, but hearing it from someone who has been studying centenarians in one of the world’s “Blue Zones” really validated the line.

This doctor from Okinawa was visiting my country (the Philippines) at the time, and that quote uttered at that particular moment was pivotal for me, because just 8 months before that, in March, my family’s life turned upside down when my mother was diagnosed with breast cancer, and a week prior to that her oldest brother was found to be suffering from lung cancer. I ended up monitoring them both, and at the side I was also minding my father who was recovering from a recent heart attack. (Incidentally, his brother died of a heart attack).

At the time, despite being a writer for my newspaper’s health and science section for more than a decade, my knowledge about cancer was rudimentary. Our government’s health department limited its public information dissemination about cancer to early diagnosis for better chances getting cured, gene testing for cancer risk, palliative care, and the available Western methods of treatment (chemotherapy, radiation, and surgery). Hospitals focused on introducing expensive state-of-the-art equipment for cancer detection, and pharmaceuticals churned out brand after brand of “breakthrough” cancer drugs. This was what local health media was awash in.

In my family, cancer was a familiar and unwanted visitor. Several other relatives of ours succumbed to it (including a grandmother who died of leukemia). Confronted with the prospect of losing two more of my closest kin, I set it upon myself to defy the odds and stop this disease from claiming more lives from my lineage. Thus, it became my advocacy to learn more—learn the truth—about cancer and its risk factors. And I was determined to break free of the common fatalistic mindset that “maybe it’s in your genes. Most likely you will have cancer, too, so you just have to detect it early enough.”

I did not hesitate to make that trip to the United States soon after my mother’s diagnosis to interview soil nutrient experts in an organic farm in Irvine, California (on assignment for our health section). Afterwards, I took a little side trip to a conference in San Diego to learn more about a controversial alternative treatment of the Gerson Institute espousing plant-based nutrition. The Gerson Institute had published more than 50 cases of terminally ill cancer patients who somehow reversed their conditions—regardless of their genes. To my surprise, medical doctors, surgeons, and an oncologist also attended the conference. They were also “sick and tired” of the limited options conventional treatments provided for their own patients and loved ones.

I went back to Manila literally towing a mini-library of 50 books—one of which was “The China Study,” a highly recommended book by Gerson and the other medical doctors who attended the conference. 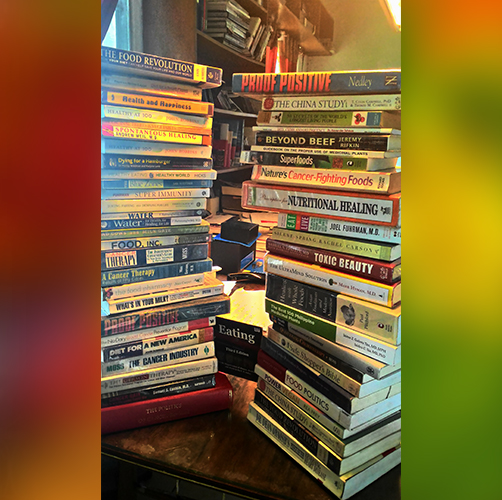 I “declared war” with cancer 8 years ago. My mother is alive and well, cancer-free for as many years. My father got back to an active community life, and there is no day when he isn’t helping out in our village one way or another. They got their lives back on track without undergoing any heart surgery (in my father’s case) nor chemotherapy or radiation (for my mother). What they did change drastically was their source of nutrition, for now they eat predominantly plant-based food (raw and cooked greens, fruits, whole grains such as brown rice, and no dairy, pork, beef, and poultry).

It is a blessing that my country is a tropical paradise that is abundant all year round with vegetables, fruits and grains.

Now, almost 9 years after my parents suffered one health setback after another, our family has grown used to a plant-based diet that may be seen by many as “radical”. As much as we can, we follow the guideline of The China Study of Dr. T. Collin Campbell and Dr. Thomas Campbell, and the Physicians Committee for Responsible Medicine: Our bodies already produce its own cholesterol, we do not need to add more of it in our diet. Cholesterol is found in all foods of animal origin: meat, poultry, fish, eggs, milk, cheese, yogurt, and all forms of dairy and seafood (Note: although my parents are gradually trying to give up seafood). Radical to most of you as it may be, but after learning so many things from medical and nutritional experts, I have realized that the only way for lifestyle diseases not to hold us hostage is for us to let go of meat-based diets. I would like to cite this principle in the eCornell University T. Collin Campbell Center for Nutrition Studies where I am currently a student: Chapter 8: Principle #7. Nutrition that is truly beneficial to one chronic disease will support health across the board.  The plant-based diet has a very broad effect. This is due to the fact that these diseases share a common biochemistry that causes disease to occur in the first place. Nutrition seems to act through that medium to affect a wide variety of diseases.

Cardiovascular diseases and cancer, which both my parents struggle with (and are conquering despite their ages, both 76, through a predominantly organic plant-based diet), are the top two killer diseases in the Philippines. Incidentally, this country is where the livestock industry and fast-food chains abound. Data has shown that the Philippines is one of the highest meat consumers in the Asian region. In my 2007 phone interview with Dr. Campbell for my newspaper, he was quoted in the article as saying: “If Filipinos decided to eat plant-based diets and seriously rejected fast-food chains, they would gain much stature, more health, and be much richer and independent in the future,” he said. My advocacy for my parents has not stopped. I wanted to share it with Filipinos who are predominantly on a western diet. The China Study (Note: The book is already locally available in all nationwide bookstores in the Philippines) is so compelling that it has been influencing a number of health-conscious Filipinos. It is here in the Philippines that he “uncovered a dark secret” — that “children who ate the highest protein diets were the ones most likely to get liver cancer,” a predominantly adult disease.

I would like to emphasize the following studies, some of which were published in reputable scientific journals; some summaries taken from “The China Study” book (a product of more than four decades of international collaborative research led by Campbell), while some studies cited below would show genetics as much less important than environmental factors; and how diets play a profound role, as cited by preventive health care expert Neil Nedley, MD, in his “Proof Positive” book.

*On the lecture of Dr. T. Colin Campbell Nutrition Studies in Chapter 14 that stressed “nutrition controls the expression of genes involved in the development of cancer”: “If we have genes that can give rise to cancer, we can use nutrition to control the expression of these genes.”

*The genes that you inherit from your parents are not the most important factors in determining whether you fall prey to any of the 10 leading causes of death.

*The hope that genetic research will eventually lead to drug cures for diseases ignores more powerful solutions that can be employed today.

*Breast cancer is related to levels of female hormones in the blood, which are determined by the food we eat.

*Consuming dairy foods can increase the risk of prostate cancer.

*According to Principle #4 of Campbells’ book: Genes do not determine disease on their own. Genes function only by being activated, or expressed, and nutrition plays a critical role in determining which genes, good and bad, are expressed. “Not all genes are fully expressed all the time. If they aren’t activated, or expressed, they remain biochemically dormant. Dormant genes do not have any effect on our health.”

The following immigration studies provide an eloquent point that in the development of cancer, genetics are much less important than environmental factors, such as the way we live and eat. According to Dr. Nedley in “Proof Positive”: “Clearly, there is much more to cancer than genetics. Diet plays a profound role in causing or preventing cancer.”

*Doll R, Peto R. The causes of cancer: quantitative estimates of avoidable risks of cancer in the United States today: J Natl Cancer Inst 1981 Jun;66(6):1191-308. “In Japan most cancer rates are low (with the exception of stomach and oesophagus), but when people from Japan emigrate to Hawaii, death rates of many types of cancer become quite similar to the Caucasian Hawaiians. (Figures of annual cancer mortality rates of Japanese immigrants per 100,000 printed in ‘Proof Positive’ showed the changes in mortality rates of various cancers due to migration. It would show that seven of the 9 cancers listed increase dramatically when the Japanese come to live in Hawaii,” explained Nedley.

*Stemmermann GN, Mandel M, Mower HF. Colon cance: its precursors and companions in Hawaii Japanese. Natl Cancer Ins Monogr 1979 Nov;(53):175-179. “Epidemiologists believe that changes in dietary habits are one of the main resasons why cancer risks change in those who immigrate,” said Nedley.

*Tillotson JL, Kato H, et al. Epidemiology of coronary heart disease and stroke in Japanese men living in Japan, Hawaii, and California: methodology for comparison of diet. Am J Clin Nutr 1973 Feb;26(2): 177-184. “The dietary practices of the Japanese undergo marked transformation when they move to Hawaii. Unfortunately, most of the changes are for the worse. The Hawaii emigrants eat twice as much fat and substantially less carbohydrate than their peers in Japan. They eat substantially more butter, margarine, and cheese, and slightly more meat. Their consumption of rice and tofu (soybean curd) drops,” said Nedley.

Nedley noted that first-generation immigrants retain more of their Japanese eating habits than their second-generation offspring. Compared to their parents, those born in Hawaii eat significantly more animal protein, fat, saturated fat, and sugar. These dietary changes contribute to the increased cancer rates at such diverse sites as the colon, rectum, prostate, breast, womb, and ovary…. Similar associations have also been reported in studies of Filipinos migrating to Hawaii. The immigration studies mentioned here provide only a glimpse of the wealth of research published on this topic. They make an eloquent point that in the development of cancer, genetics are much less important than environmental conditions, such as the way we live and eat. Clearly, there is much more to cancer than genetics. Diet plays a profound role in causing or preventing cancer.”